Using a mix of the Google Design Sprint UX framework and the Design Thinking methodology, as this company is a Startup running the Lean Start Up framework, were you need to quickly create a prototype and test with users, I had to quickly get a deep understanding on who the users were and to test the current system to understand the flow and where were the user pain points.

After gathering up the notes from the usability tests, I separated them  into what is called Affinity map, where patterns of pain points started emerging.

After collecting the notes from the usability trials, I separated them  into what is called Affinity map, where patterns of pain points started emerging.

Alongside the CEO and the Lead Developer, we ran a workshop called 360 View.360 View is a Venn Diagram where there are 3 circles are divided into User Experience, Development feasibility and Business Impact.Where the circles overlap is where we would find  most impactful features.The center is where all 3 areas meet, thus presenting our top tasks. 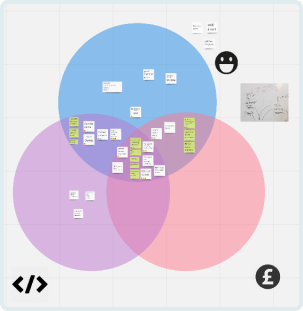 1- Find out why the users weren't configuring a part even though they didn't have to wait for all the elements to fully load.

"After uploading multiple files I usually  go for a coffee and return to ensure if my files were uploaded."
User

The top complains of the users interviewed was about the loading time.

Although the users didn't need to wait for the page to fully load, they were waiting because the wrong UI loading state was used. 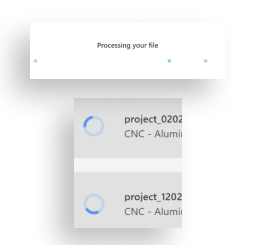 Infinite loading UI component was being used for the thumbnail of the 3D part, which was the last component to load. Therefore the users were waiting for it to be completely loaded in order to interact with the platform. Thus giving the impression that it took too long ot load.

Skeleton loading is being applied by major companies such as Facebook, Linkedin, Google Drive, YouTube on their pages and apps due to researches showing that the perceived duration and the emotional reactions were better than other loading methods.

By running usability tests,  I was able to test the UX workflow of the current platform, and by creating tasks for the users I discovered that either the user couldn't find how to use the Multipart configuration or wasn't able to seamlessly configure it.

Subsequently a lot of research on direct and indirect competitors, I gathered as much information on how big software companies would solve the same problem of selecting and configuring multiple files. Patterns started to emerge, and I decided to run a Crazy 8's workshop used by Google, where you fold an A4 paper in such a way that you have 8 small canvases to sketch,  to come up with equally many different solutions for the same problem in a short period of time.The CEO of the company and myself gather the findings of the workshop and decided to start to wireframe it.

User flows were defined and laid into a low fidelity wireframe, where we could focus on the functionality itself and iterate faster through the prototype.